On Monday, October 7, 2019, a Ribbon Cutting Ceremony for the newly constructed housing Unit for eight four (84) year old Nora Johnson, was held in Mendez District, Point Hill  St. Catherine.
During the ceremony, The Minister of Local Government and Community Development, the Hon. Desmond McKenzie presented Miss Johnson with the keys to her new home. Also in attendance was His Worship the Mayor, Councillor Norman Scott and Councillor
Wesley Suckoo of the Point Hill Division.

Councillor Suckoo, expressed his pleasure in being able to assist Miss Johnson and thanked the Minister McKenzie and Mayor Scott for making it all possible.
Mayor Scott commended Minister McKenzie for understanding the need of the most vulnerable within the society.
In his address Minister McKenzie noted that the unit is the 14th to be completed under the Indigent Housing Programme. He said four (4) other units are under construction, of which one is for St. Catherine. He added that the Ministry of Local Government and Community Development anticipates that they may even surpass the target for the calendar year, which is 28 units.
The Minister pointed out that more funds have been invested into the programme over the past two (2) years because there is a need for it. He added that there are 14,000 registered poor across the country, the majority of whom are unable to afford proper housing. He further stated that outside of building these units, the Government through the Ministry, has provided an additional $20 Million Dollars.  This amount will be shared across the Municipalities for the Poor Relief Officers to carry out repairs to houses that are occupied by registered poor.
Minister McKenzie thanked Mayor Scott, Councillor Suckoo and the staff of the Municipal Corporation for their support and congratulated Miss Nora Johnson on the acquisition of her new home.
In her response Ms. Johnson said she is happy and appreciates her new home which would now prevent her from getting wet whenever it rains.
The Indigent Housing Programme is funded by the Ministry of Local Government and Community Development. 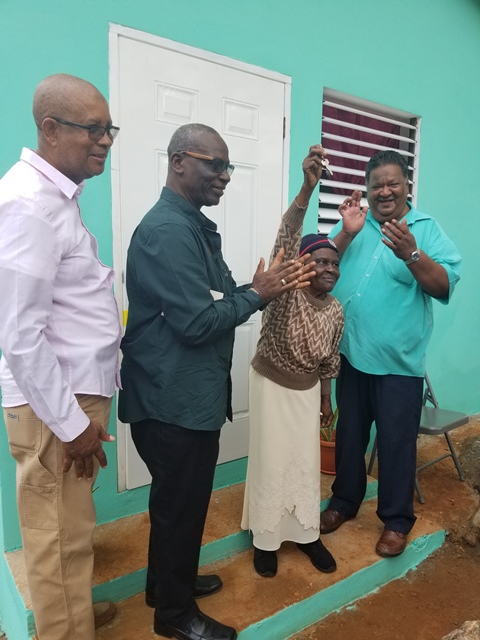