​Towns within the Parish of St. Catherine 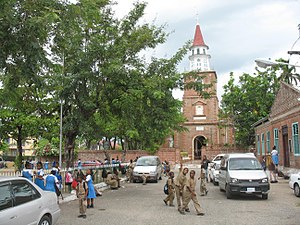 Spanish Town is the largest town in the parish of St. Catherine.  There are many churches, including the Anglican Cathedral of St. James, a Roman Catholic Church (St. Joseph’s), a Baptist Church and a Methodist Church.  The National Archives are located behind the Rodney Memorial beside the old King’s House, with increased space since the Island Record Office moved to Central Village in 1996.

In 1997 the centre of Spanish Town was declared as a Heritage District.  The centre piece is the Georgian square with the Old King’s House on one side, the Courthouse on another, the Old House of Assembly (now the St Catherine Municipal Corporation offices) and the Rodney Memorial.

The town contains a post office, a police station, a fire station, a court house , a tax collectorate and a Parish Library.  Spanish Town has a train station and a bus park.  It has a parochial market, a general hospital (Type B) and health clinics.  The St. Catherine District Prison is located in the town, as is the headquarters of the St. Catherine Parish Library.  Spanish Town has four branches of Kingston-based commercial banks: National Commercial Bank, Bank of Nova Scotia, Jamaica National Building Society, Victoria Mutual Building Society.

The G.C Foster Sports College (tertiary) is located at Angels on the outskirts of Spanish Town.  There are two major (traditional) high schools in St. Catherine’s capital: St. Jago High School (formed by the merger of the Cathedral High School and Beckford & Smiths High School), and St. Catherine High School, reputed to be the largest high school in the Caribbean.  Jose Marti Technical High School at Twickenham Park was a gift to the Jamaican people by the government and people of Cuba.  The parish capital has a number of primary and all-age schools. 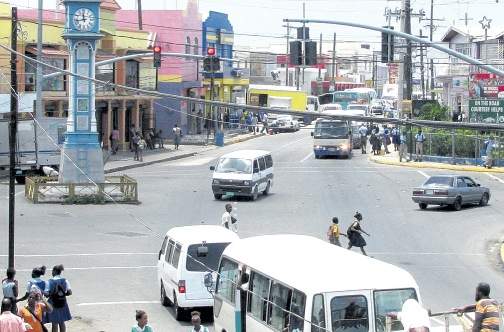 In 1970, Old Harbour, former capital of the parish of St. Dorothy, was the fourth largest town in St. Catherine . By 1991 is had grown to become the third largest town with a population of 17,778.  As a former parish capital, Old Harbour has many public offices.  The town contains a post office, a police station, a fire station, a court house, a tax collectorate and a parochial market.  There is also an Anglican church (St. Dorothy’s), a Methodist chapel, a Roman Catholic Church (Sacred Heart), a Seventh-Day Adventist Temple, a Brethren church and several Pentecostal and Evangelical churches.  There are several primary and high schoolsThe town boasts a large clock in the centre of the main square – a national monument – which actually works!  A Type III Health Clinic serves the town, as well as several doctors and dentists in private practice.  There is also a train station in the town.  A branch of the St. Catherine Parish Library is located there.

Several industrial enterprises in or just outside the town.There are several bakeries producing bread, patties and other pastries, and there are several supermarkets and shops of different types.  There are several restaurants serving locals and persons passing through the town.  The National Commercial Bank and the Bank of Nova Scotia have branches in Old Harbour. 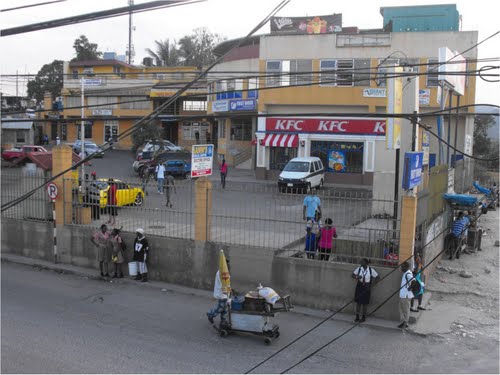 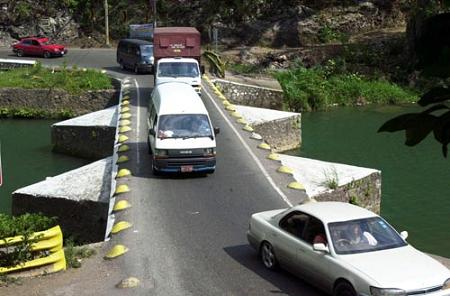 Bog Walk, the former capital of the parish of St. Thomas-ye-Vale, Employment is provided by a milk condensary at Bybrook operated by Nestle, a meat processing plant operated by Content Farms, a citrus processing plant operated by the Citrus Growers’ Association, and large citrus farms on the outskirts.  The town has a police station, a Type II Health Centre, a post office, a market, a branch of the St. Catherine Parish Library, a primary school and a secondary school.  Bog Walk has a Community Centre and Nestle has a Sports Club which benefits the town. The town has a credit union, a PC Bank, gas stations, several restaurants and hairdressing parlours, a pharmacy, several supermarkets and grocery shops and a large wholesale meat supplier.

Ewarton has a number of churches, a Type II Health Centre, a public market, a post office, a police station and a fenced community centre built by Sports Development Foundation with a playfield. There are gas stations and major supermarkets and a bakery. Residents have water in their homes, which some supplement from private tanks.  Houses are also supplied with electricity and telephones. 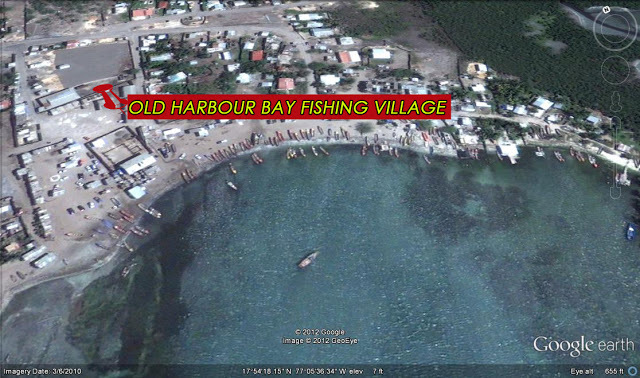 Old Harbour Bay – originally known as Esquivel – is located on St. Catherine’s western coast, three miles south of Old Harbour. It was founded in the 1500s by Jamaica’s first Spanish Governor, Juan de Esquivel, who established a shipyard there where harbour facilities for the capital were located.

Old Harbour Bay has been regarded as the largest fishing village in Jamaica. The fish landed there are caught locally on the south shelf, on inshore banks like California Bank and Mackerel (Bowdich) Bank, and on the Pedro Banks offshore. There is a fish market and parochial market on the beach.

The Jamaica Public Service Company operates a major power station at Old Harbour Bay. There is one bakery in town making bread and buns. There are many small shops, bars and restaurants. Outside the town are several large farms with mango orchards, a hatchery for poultry, and a factory which produces bottled juices.


POINT HILL
Point Hill has a Type II Health Centre, a branch of the St. Catherine Parish Library, basic schools and a Primary and Junior High School. The town has a police station and a post office, supermarket in the town. The local economy is based in small farming. Many homes have piped water complemented by private tanks, electricity and telephones.

ABOVE ROCKS
Above Rocks has a health clinic, St. Mary’s College, the School for the Handicapped, and the Trade Training Centre which has recently become a HEART Academy. There is a post office and a police station.

RIVERSDALE
Riversdale has a major railway station and a market, a Type III Health Centre, a branch of the St. Catherine Parish Library, a police station, a post office and a community centre, basic schools in or just outside the town, and all-age schools. There is electricity and telephone service in the area, but few houses have running water piped into their homes, obtaining water from standpipes on the public roads or from private tanks. Small farming is the main occupation of the community.


GUY’S HILL
The St. Catherine-St. Mary boundary runs through Guy’s Hill, and the data below refers only to St. Catherine. It has many churches: Anglican, Wesleyan, Roman Catholic (Our Lady of Perpetual help), Apostolic, All-Saints, Gospel Hall and Kingdom Hall of Jehovah’s Witnesses.  It has a Type III Health Centre, a branch of the St. Catherine Parish Library, a public market, a post office and a police station. There is no piped water in homes; private tanks are filled by the NWC for a price. The town has electricity and private telephones.

LLUIDAS VALE
There are a number of basic schools, all-age schools and the HEART Vocational Training Centre. There are many churches: Anglican, Baptist, Church of God, Seventh Day Adventist, Pentecostal, the Remnant Church and Church of Christ.  The town has a Type I Health Centre, a Post Office with banking services, a Police Station (at Shady Grove), a public market, a community centre and a cemetery.  The nearby Worthy Park Estate (sugar, citrus and poultry) provides employment. There is a credit union at Worthy Park. Private homes have piped water and private tanks; water is also obtained from standpipes on the road. Homes also have electricity and telephones.

GLENGOFFE
Glengoffe has an unused parochial market, a Type II health centre, a police station, a post office and a community centre. There are basic schools, a primary schools (Grateful Hill) and a new secondary school. There are many churches: Methodist, Mizpah, Bible Truth Church of God, Church of God of Prophecy, Mt. Emmanuel, Pentecostal and the New Testament Church of God. There is electricity and telephone service .Water is mostly from roadside standpipes.

TROJA
Troja has a Type I health centre, a post office, a police station, a basic school, an all-age school and a major station on the Kingston to Port Antonio train line. There are many churches: Baptist, Seventh Day Adventist and two branches of the Calvary Church of God.  There is electricity,


CENTRAL VILLAGE
Central Village is on the outskirts of Spanish Town next to Twickenham Park, on the way to Kingston. The Registrar General Department was relocated there from Spanish Town in 1996 to a newly built complex, next door to a newly built tax collectorate.  The Institute of Jamaica operates the White Marl Arawak Museum (closed for repairs since Hurricane Gilbert in 1988). A number of churches are located there, including Roman Catholic (Our Lady of Hope), New Testament Church of God, Church of God of Prophecy, Seventh Day Adventist and a Zion Church.  In addition, there is St. Monica’s Home for the Aged operated by the St. Patrick’s Foundation. Several large manufacturing concerns are located there, including LASCO, West Indies Synthetics (WISYNCO), the Jamaica Broilers Chicken Hatchery, the Sherwin-Williams Paint factory, Ashtrom Construction Company, General Paving Co. and an Total Gas Station. The headquarters of the Jamaica Red Cross is located there, as well as the Police Academy and aquaculture facilities of the Fisheries Division (Ministry of Agriculture). The area has a Type I health centre, a police station, a postal agency, basic schools, an Junior High School (White Marl).  Nearby are to be found the Caymanas Golf Course, and the Polo Grounds of the Kingston Polo Club.


SLIGOVILLE
Sligoville was the first free village, where newly freed slaves established a settlement in 1835 with the assistance of Baptist missionaries.  It is strung out, with a police station, a post office and a Type II Health Centre. There are several churches: Baptist, Anglican, Zion, Church of God of Prophecy, Four-Square Church of God, Church of the Living God, Fellowship Chapel, Seventh Day Adventist, Jesus Only Church of God and the Pentecostal Church.  Basic schools and an all-age schools share the same compound. The Chinese Government built a Mini Stadium in this community. There is no piped water into homes. The Parish Council trucks in water to fill tanks or to distribute to residents. There is electricity and private telephones.

KITSON TOWN
The economy of Kitson Town is based on small crop and poultry farms. There are no major factories or farms, and the public market is now unused. The town has a dilapidated Type I Health Centre, a postal agency, and a returning office. There are eleven churches: Baptist, Methodist, United Pentecostal, Seventh Day Adventist, Calvary Church of God, Zion, Seventh Day Church of God, Church of God of Prophecy, Assemblies of the First Born Church of God, Kingdom Hall of Jehovah’s Witnesses and the Miracle Church of God.  There are five basic schools (Kitson Town, Mercury, Bendon, Old Road and Seventh Day Basic) and one all-age school. The bookmobile visits regularly. There is a branch of the St. Dorothy PC Bank, one major wholesale supermarket, and a tourism attraction (Winter’s Nature Park and Farm with entertainment centre). There is no piped water in homes; residents have private tanks or buy from water trucks. There is electricity and telephone in homes, and one public call box.

About the St Catherine Municipal Corporation